Curiosity started my journey with AIM back in March 1998 – I had heard about live blood analysis and wanted to find out what it was. The practitioner suggested getting on two products, Herbal Fiberblend to detoxify and green barley juice to nourish my body. I didn’t even question her.

That was at a time when you had to order a 6-pack so I went with it. At the time I really had no idea why it worked or how it worked but work it did – enough to keep me going…in more ways than one…until then I didn’t even know I had been constipated for as long as I could remember. I had a bowel movement whenever, however painful, but that was normal, right?

Little did I know that this could change to regular bowel movements even twice or three times a day. When I listened to Teresa Schumacher, the wise woman behind Herbal Fiberblend, I decided to follow her suggestions of a more intense cleanse. I took Herbal Fiberblend mixed with Cascara Sagrada, Composure and RediBeets five times per day. The first week this was for one day, the second week for two days, and three days during the third week. I found it easy to implement the accompanying juice fast with BarleyLife and the Garden Trio. I was amazed what still came out of me. At one point, the odor of a bowel movement reminded me of the very distinctive smell of chemicals used for perms. I got those about 15 years prior and had no idea that all that was still stored in my colon. Needless to say, I was happy to put up with the taste of “dirt and pepper“. Herbal Fiberblend works!

Yet I resisted the idea of selling products; I just kept taking them for my own personal health. To get the best price, of course, I had signed up as a wholesale member, which included regular magazines. When Dr. Norman Shealy was smiling at me from the front page of one of them, I was intrigued, to say the least. I had taken workshops with him and Caroline Myss and here he was promoting AIM Cell Wellness Restorer. As I was reading about the “Miracle of Magnesium”, all of a sudden a few side comments during past workshops made sense. I got excited, started sharing copies of the interview with friends and clients, and as a result, started ordering more products, more frequently.

My upline, a few levels above me, Irv Goertzen, bless his soul, called me out of the blue one night and explained the business model to me. He coached me to become a Director, to receive more money back on the products I was buying. Irv became a good friend and mentor. When I asked for help he was there to support me in any way he could.

The 2001 AIM convention came around and another AIM distributor from Ottawa couldn’t take advantage of the convention package she had won in the contest. I didn’t even know there was a contest. However, I was asked if I’d be interested in purchasing the prize from her at half price. I love bargains, saw the pretty hotel pictures on the website and off I went to Florida.

Other than Irv and Klazina Ketting, who I had met at a local Women’s Business meeting, I knew nobody. So the woman in the elevator without a name tag was a stranger to me. As it turned out, I met one of the greatest of AIM right there and then: Dr. Mary Ruth Swope. I met Janet Pauly, who I had listened to about her miraculous recovery from cancer. I also connected with other first-timers and made friends with people who I have stayed in touch with all these years.

Needless to say, I played the next contest and was able to take my then 9-year-old daughter on a wonderful trip to beautiful Hawaii. AIM’s 20th anniversary celebration allowed us to stay at the Hilton Waikiki Resort on the Big Island. 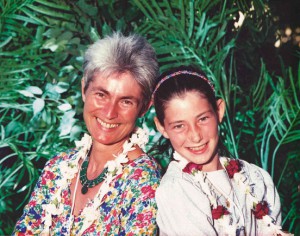 Since then the AIM conferences have become our yearly mother-daughter trips. They have taken us to lots of fun places that most likely we would not have visited without AIM. Too many highlights to list, these trips have created bonds that I could never have dreamed of: a bond with the AIM family, a bond with my body to feed it the best I can and a bond with my daughter that makes my heart sing.

In addition to meeting many people and hearing their testimonials, here are some personal experiences that gave me faith that the AIM products put health and healing in my hands on a daily basis and in crisis situations.